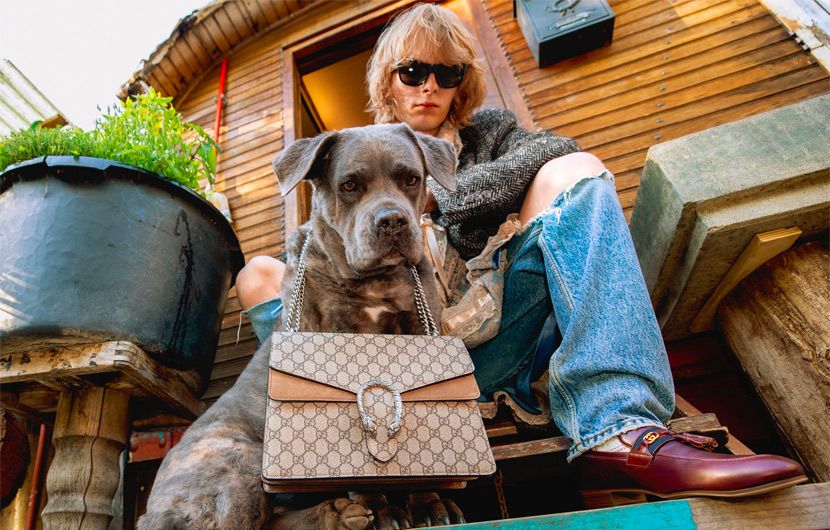 Decadent, opulent but also culture-oriented and ironic... Gucci's aesthetic is one of the most distinctive in the world. Headed by Alessandro Michele since 2015, the Florentine design house's image has long-standing values spanning almost 100 years. The brand was founded by and named after Guccio Gucci in 1921. A former doorman at the Savoy Hotel in London, Gucci spent time admiring the suitcases belonging to the establishment's rich clients. After returning to Italy and working with the trunk-maker Franzy, he launched his own leather goods business. At that time, the Gucci design house made products for an equestrian-loving clientele. Some emblems from this era remain today, such as the horsebit featured on the iconic Jordaan loafers. Guccio Gucci gradually introduced more pieces, from suitcases to gloves and bags. Due to a leather embargo during the Second World War, he was briefly forced to use cotton. No matter  necessity is the mother of invention, and it was during this period that the "Double G" monogram and its signature web stripe emerged, remaining prominent symbols for the label. When the founder passed away in 1953, his three sons Aldo, Vasco and Rodolfo took over the reins of the business. Together, they contributed to the brand's global rise, gradually becoming renowned for its accessories.
It wasn't until the 1990s that its ready-to-wear lines (launched in 1981) were noticed. In 1990, a young unknown Texan designer called Tom Ford became the design director for this range. Four years later, he was promoted to creative director. Under his leadership, Gucci became synonymous with sexy. Initiating the porno chic wave, Tom Ford made the fashion house an avant-garde player in the movement. When he stood down ten years later, the label was one of the most profitable (and famous) in the world. Then, Frida Giannini came onto the scene. With a discreet and subdued style, she brought a more sophisticated touch that is still feminine. Despite her efforts, sales slowed down in 2014. Frida Giannini was replaced by an illustrious newcomer: Alessandro Michele.
While he appeared to be a young newbie in the eyes of the public, the Rome-born designer was far from a beginner. Trained at the Accademia di Costume e Moda, the designer worked for Les Copains and Fendi before joining the ranks at Gucci as a handbag designer under Tom Ford's leadership in 2002. A connoisseur of the brand, its DNA and aesthetic, he was a pioneer, designing the first men's collection in five days and completing the women's in just a few weeks. They were an instant success. Under his management, Gucci won back its long-serving fans and became a coveted label for all generations. Michele's peers took notice and in late 2015, he was awarded the International Designer Award at the British Fashion Awards and received the International Award at the CFDA Awards the following year. Inspired by the Italian renaissance, dandyism and certain punk elements, he introduced a new image and a fresh new way of thinking: done with gendered catwalks, Gucci runways are now unisex. Its designs are now also cruelty-free, no longer using animal fur. A smart rewriting of the rules, from a label whose run of good fortune is just beginning.